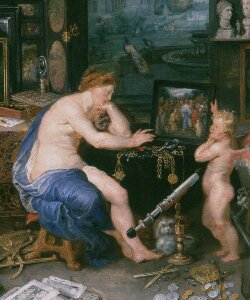 Lisa Rosenthal, Associate Professor, Art History Program, received her Ph.D. from the University of California at Berkeley and holds affiliated appointments in the Gender and Women’s Studies Department and in the Unit for Criticism and Interpretive Theory.  Her teaching areas broadly span fifteenth to seventeenth-century European art with a particular focus on Baroque art and art theory.  Her research interests include gender and politics in seventeenth-century Dutch and Flemish painting and printmaking, theories of visual allegory, notions of the artist in early modern culture, art collecting, and the functions of art in the domestic sphere.  She is the author of Gender, Politics, and Allegory in the Art of Rubens (Cambridge University Press, 2005) and is the co-editor of Early Modern Visual Allegory: Embodying Meaning (Ashgate, 2007).  Her articles have appeared in Art History, The Oxford Art Journal, The Annual Bulletin of the Antwerp Royal Fine Arts Museum, and the Nederlands Kunsthistorisch Jaarboek. She is a past recipient of a J. Paul Getty Postdoctoral Fellowship in the History of Art and the Humanities, an Arnold O. Beckman Award from the University of Illinois, Urbana-Champaign and a UIUC Center for Advanced Study Fellowship.  Her current work is on seventeenth-century Flemish gallery pictures and their enduring allure in the contemporary imagination.